Memories of Rebel by Kimberly Becker


"Left with memories of Sunshine in your fur, squirrels on roofs, your head on my pillow as I pet you to sleep." 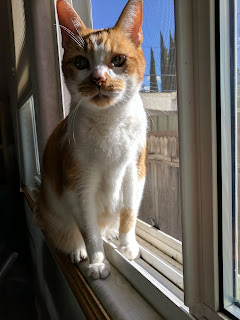 I would like to thank Kimberly for being my guest writer this month. I was for fortunate enough to have her share her story of Rebel. She also allowed me to honor Rebel  by making pieces fashioned from photos of his paw print his markings . His ashes were lovingly fused inside. Below is a beautiful tribute honoring him with love.

I am the definition of a crazy cat lady.  I keep cat food in my car- just in case, I'm HORRIBLY allergic and up until recently I had one. He was my I-love-you-enough-to-put-up-with-all-the-sneezing-hives-watering-eyes-and-runny-nose baby. He slept in my bed and was a total blanket and pillow hog, he'd often greet me at the door, and give kisses when I asked (usually).  He was my baby, and I've found it difficult to explain to people that haven't loved a pet this way the gaping hole he's left behind.

I named him Rebel and it was a name well deserved. He did what he wanted, when he wanted, how he wanted -even if it was an inconvenience.  So he was a typical cat.  But even though that was the name on his collar, to me he was Boo.  As a kitten he wasn't very coordinated, often running into walls chasing after things. And I, being a "new mother" was constantly checking him for boo-boos.


When we found out he was sick with CKD I became that fawning mother again. I was fortunate that my job was only a 5 minute drive from where he was (he lived with my parents) and I was able to spend my lunch breaks with him.  My once a week sleep over visits turned into a blow up mattress on the floor that I slept in every night, just to be near him.  I spent most of my free time with him covering him in blankets, making sure he ate, giving him IV fluids, everything I could to make him comfortable.  And in those following months he was. He was himself. He was happy.  It wasn’t until his last week that he really seemed ill.

I often find myself thinking of that week, remembering the ache in my chest as he got worse. He had always been an indoor only cat, due to an inability to be vaccinated. But I found a pet stroller and was able to take him for a walk around the neighborhood. (Like I said, crazy cat lady)  I like to think he really enjoyed it because staring out windows was one of his favorite things to do.  We found out the next day we had to let him go.  I was so grateful I was able to take him out that once, wishing there had been more.  I remember that morning he wouldn’t eat so we offered him chicken.  He started to purr as he ate a few pieces.  We always joked he’d be on his death bed but still come running for chicken and when the vet told us his blood oxygen level was so low he didn’t know how he was still alive we knew that was true.  That was the hardest day of my life. Hearing him cry as they brought him in the room I forgot to breathe and I didn’t think I’d ever stop crying.  All I thought about is what more I could have done. When you love this much, nothing short of everything seems enough.

Time has helped. Knowing he’s no longer in pain or afraid of trips to the vet, and the wonderful jewelry Jodi made me have also made it a little easier.    Sometimes I watch videos of him to remember before he got sick.   I remember the quirky things he did, like leaving fly heads -just the heads- on my pillow. Which I hope was because he loved me and wasn’t a warning. Or the time he rubbed his butt from the litter box down the hall and in a huge circle in my sisters room leaving a poop streak the entire way. He loved carrots and shoes, you had to hide them or you'd come back to them covered in cat hair and drool.  He’d come running if you said “chicken” and we had to start locking up the trash because he’d find leftovers.  He once broke a small rock carving I had in his likeness and ate half of it.  He was so weird and I loved him for it.  I live with the grief his death has caused but he was and is such a light in my life.

Rebel has always been odd and well deserving of his name. We quickly learned of his affinity towards stinky shoes, especially those that had been around dirt, and root vegetables - specifically carrots. He loved to roll, rub, hug, anything to transfer the scent to himself. He often left carrots with his white cheeks turned orange. Which made it such a surprise when we discovered he also loved dryer softener sheets. One morning while cleaning what I thought was a hairball, I noticed it was not hair, but solid... a used dryer sheet that he had eaten. We quickly learned to immediately dispose of them to prevent them from sitting in laundry he could reach. Because what cat doesn't love to lay in freshly cleaned anything?  But Rebel being a rebel, found his way  to an unused one and unbeknownst to us, he ate it. He got very sick, very quickly.  I remember sitting in the vets office, covered in his purely ammonia pee, crying to my father. "Use my college fund and savings account, I don’t care. We have to save him." The emergency vet wanted $3000 to keep him 3 days, on an IV full of meds to clean out his system and hydrate him. When we brought him home he slept the majority of the next two days, in his bed that we moved to the bathroom to be near his litter box. We were told to watch him, and bring him back if his condition worsened. Even after my mother told me not to I stayed on that bathroom floor laying next to him those two days. Not knowing what to do, I sang just one verse of "You are My Sunshine" on repeat. It became our song. Anytime he didn't feel well I'd sing it, begging my sunshine to get better. I sang it those 2 days and often in his final months. And he returned the favor, any time I was sick he would lay with me until I was better. That is why I chose the metal piece with "my sunshine," because he was my sunshine.  I chose the amber to match his coloring, and the triangle shape to represent his ear.  He would often walk over and rub the back of his ear against my face, giving me "kisses." So the shape, color, and writing that make up the beautiful pendant Jodi made me all represent something that reminds me of him. 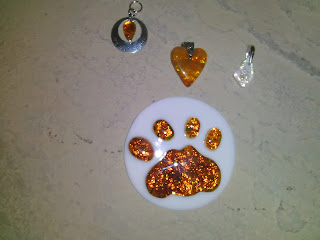 Posted by Jodi Jarvis-Therrian at 11:23 PM No comments: