In my book "Furry Philosophy and Memoirs Set in Stone" I was fortunate enough to have others share stories of special memories of their pets and photos of the art made to honor them with love. I am now collecting new stories for a revised addition and so that others may help heal their hearts by reading and resonating with these special words.I hope these special lives will  live on forever through these stories. I believe when lose a special love,  it is comforting  knowing others have loved as much and felt the same.

I was for fortunate enough to have Miriam share her  story of Catrina. She also allowed me to honor Catrina by a sun catcher designed with her special memories in mind, with her ashes lovingly fused inside.Thank you Miriam for sharing your story and trusting me to honor Catrina's life with love. Below is her story. 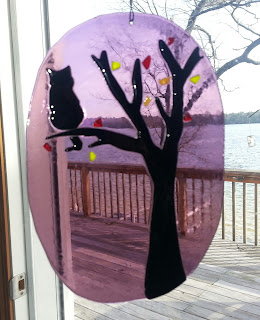 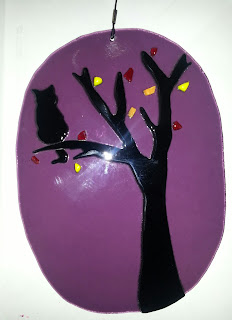 I’m in the mood for talking about this wonderfully spirited ginger cat: Catrina! She’s not a shy cat at all, so I suppose this is divergent from my topic here but she is also a major cat figure in my little cat household.  In some ways she’s the polar opposite of Sammy.  Where he does not seek to be alpha cat, Catrina will fight for that post.  Where Sammy has a complete entourage of adoring fans, many of the others view Catrina with fear and trepidation.

At 6 lbs she is the smallest cat in the place  but she has confronted and hissed at every other cat in the house. Except for Zeke they  have responded either by skulking away from her or, as in Napoleon’s reaction, stalked her until she’s fed up and engages him in a tooth and nail, rolling, spitting cat fight.  Definitely a sight to see. Actually there are 2 of the munchkins who don’t let her phase them. Penny and Poppy will just give her a glance and then saunter right by her even as she hisses.  Luckily she never pursues them.
Pre-cat rescuing, I lived with just Catrina (currently 18 ½) and Zeke (just about 20 now) since they were young. Gorgeous, sweet-looking Catrina was snatched from the Humane Society while on the list to be gassed any day. The documents said she was 1 year old. They also said she was already spayed but as I learned a month after she moved in, that was not the case. There is nothing like an already emotionally disturbed cat going into heat. Sigh.  I still assume she was 1 year old  then since no vet has countered that.
Zeke was 2 ½ when Catrina joined the family.  I had lost a 16 year old cat name Amelia Earhardt to massive kidney failure a month before. Zeke was very attached to her, so I brought home Catrina to give him a friend.  He immediately fell in love with her, but she hissed, snarled, turned to me and attacked.  Hmmm.  I called the shelter up to ask about this and they said to bring her back. I asked what they would do and they said put her down. Not willing to allow that to happen, I engaged Catrina in a battle, of sorts. Wearing oven mitts and thick slippers, I gave her the tough love treatment (along with a good spaying) and we came out the other side.
She and Zeke turned into cuddling buddies which was always delightful to see. And truthfully I love spunk in a cat and she has plenty of that.

Crazy Catrina has used up her welcome with most every vets office we’ve visited. Getting her into the carrier was like loading an atomic bomb into a suitcase. I can go on and on, and I imagine I will eventually.
I love telling the horror stories about Catrina but she has been my sweet little girly cat ever since, though not too many other people have ever seen that side of her. Not significant others, not family nor cat sitters. In fact one of my closest friends who I have traded cat sitting duties with for years, neglected to tell me that she had visited him with a flying leap attack on his back while helping me out with them. Now that’s a good friend!

Now in her old age, with a certain amount of kitty senility coming into play, she has become gentler and easier to cuddle with.  I truly love this cat enormously.
Of course 18 years of antics is way too much for one blog post, but I’ll end this one with this tale of when I moved into my current home. Over the years I had taken Catrina and Zeke outside to play in the yard and get fresh air. (I’ve got some good stories from her outdoor adventures!)

I’ve since changed my mind about letting cats out at all after seeing the things that happened to the over-50 cats I’ve had to rescue in the last 10 years, but taking Catrina outside has a calming effect on her inside behavior. So I continue it with her only under supervision.
In my first summer here I had an elderly neighbor, Albert, who would sit on a bench by the front of his house and chat up anyone who walked by. I’d talk to him and gather lots of local juicy gossip, but had mixed feelings about him. He had a foul mouth on him and said some racist things about some of our non-white, non-Euro neighbors.  I practiced ways of politely but firmly reprimanding him on this but he would just do it again the next time we spoke.

So, he wasn’t someone I expected to have been a cat lover. But he was. I found him feeding a few strays and then I realized that my Catrina had fallen in love with him. Upon being let outside she would race over to him, purring and rubbing herself against his legs. I was speechless. I’d never seen her do that with anyone.  In fact after he passed away she has continued it with his widow and 2 adult children (all of whom I have talked into adopting some of the various cats I’ve scooped up off the street, given Catrina’s positive references for them). But my friends are still all quite afraid to be left alone with her.

Posted by Jodi Jarvis-Therrian at 5:14 PM No comments: