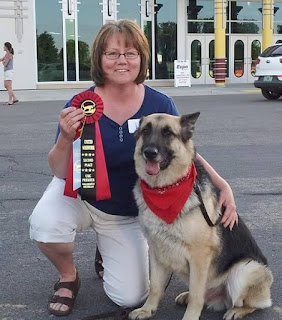 A few months ago, I wrote about the group, Paula Smith, from Dog Blessed and I formed called "Camp Kylee".  It offers an affordable opportunity to train with like minded people and dogs. We want people to understand their dog is not bad, just because it is reactive to others.

This group helps to give owners the proper tools to live happily with their reactive dog, and not set them up for failure. There are many activities you can enjoy with your reactive dog that can help strengthen your bond.

I love to hear success stories of such bonding. It proves that just because your dog is reactive, doesn't mean that you should give up on them. This story of "Scout" by Lisa Gendhar, touched my heart and I felt compelled to share her story
Thank you Lisa for sharing your TEAM success!

Scout's story by Lisa Gendhar
Scout's Story Hi my name is Lisa and I have reactive German Shepherd Dog named Scout.
I adopted Scout from our local animal control shelter in January 2009. They estimated that he was about 11 months old at that time.
I spent some time with Scout at the shelter getting to know a little about him. I have 2 other dogs and 6 cats. I wanted to be sure he would fit into our pack. Scout seemed like a "normal" dog. Nothing unusual stood out about him. He let me pet him, pull on his tail and touch his paws. He seemed a little confused about where he was and why but other than that nothing unusual.
Shortly after Scout came to live with us (me and my pack), I discovered he had severe separation anxiety. He broke out of and dissembled three wire crates. Once out of the crate he proceeded to tear up any of my clothing that he could get to, knock things off the counter and break dishes. Thankfully he never hurt any of the cats.
I consulted a veterinarian who suggested we put him on medication for the anxiety and recommended a certain type of crate. I immediately went out and purchased the crate he recommended. I am very happy to say that was the perfect crate for Scout. He still has that crate and he has never been able to break out of it.
The medication approach didn't work out so well. The medication that the Vet put Scout on changed his personality. It did help with the anxiety but Scout had that glassy eye drugged up look. I also I didn't like how it changed his personality. Although Scout is a little high strung and at times very anxious, I still liked his quirky personality. I decided to pursue behavioral training instead. Scout responded very nicely and seemed to be adjusting really well.
Up to this point, Scout never showed any aggression or dislike toward other dogs. He got along great with other two dogs. My daughter stayed with me for about a year after college. She had two dogs and they all got along very well.
One day, I decided to take my dogs to a dog park. It was a nice day. I just wanted them to be able to run. All my dogs were doing very well.But while were there, I noticed a Black Lab chasing a little Jack Russell Terrier. The JRT did 2 not look like he was having fun at all. I looked around for the owners but there was really no one watching them. I decided that I didn't like that Lab's behavior so I gathered up all my dogs. I put Scout on leash and we headed toward the gate to leave. All of the sudden, what seemed like out of nowhere, that Lab came flying up behind us and circled around me to meet Scout face to face. The dog tried to bite Scout and Scout bit back. It was the most horrible day in my life. In that split second, all the trust I had built with Scout up to that point was completely destroyed.
Scout was a different dog after that. He was never the same. I would try to take him for a walk and he would constantly be looking over his shoulder in fear that another dog was coming up behind us. He became very reactive toward other dogs and would act like he would attack them if they even looked like they were coming toward him. It was very heartbreaking. I suddenly had this dog that I couldn't do anything with anymore.
I decided to have Scout temperament tested to determine if he had become aggressive. I was concerned that I would have to have him put down because I really couldn't trust him anymore either. The trainer said he had fear aggression. He was reacting out of fear and he didn't trust me. That was a very painful thing to hear... that my dog no longer trusted me to protect him because of that moment in the dog park.
I started on a journey to earn his trust again. I began learning about reactive and fearful dogs, how they view the world, other dogs and other humans. I started learning about different ways our dogs tell they are uncomfortable with a situation and how to diffuse that or how to work through it. I started doing different training exercises with Scout. But it seem like for every one step forward we fell twenty steps backwards.
There were many times I felt like maybe Scout would be better off with someone who was more knowledgeable about this type of dog than I was or more equip to deal with him. I felt like I had failed him.
In my journey to rebuild trust with Scout, I felt like he needed a job. I felt like he needed something to build his confidence level and give him a purpose. However, being a reactive dog, there were not many options available to us. He 3 couldn't be in a ring with another dog without losing his mind so Rally, obedience and agility were out of the question.
Then one day, a friend of mine, told me about nosework. She had just become a certified instructor. She thought nosework would be a fantastic sport for Scout. She said he didn't have to be around other dogs to do this sport and that it would help build his confidence. I was pretty skeptical but I checked into it. 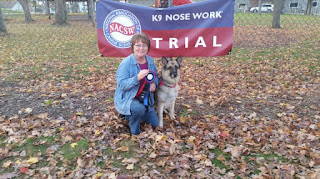 In 2012, we began our nosework journey. We still had to be around other dogs in class. That was unavoidable at times. But it was manageable. Whenever I have the opportunity to work with Scout around other dogs or people, I embrace that as long as I know he is comfortable. If he starts getting anxious, I just move him to his safe place (which is typically his crate).
Over time, I started noticing changes in Scout. We started bonding. He started asking for affection from me again. He started giving me his attention and started focusing on me more.
Scout LOVES nosework. I feel it has brought us back together. I feel like it has really given him purpose, a job, something fun to focus on and something he knows he does really well.
When I decided that I wanted to start competing in nosework with Scout, there were many people that told me Scout had no business competing in nosework because he is a reactive dog. They felt he was untrustworthy. They felt he couldn't handle the stress of a trial. There are still people in the UKC world that tell me Scout should not be doing nosework with UKC because he is a reactive dog. I am not really the kind of person to be telling "you can't do that" because that just inspires me to prove them wrong.
Scout is now 8 years old. He holds 5 NACSW (National Association of Canine Scent Work) Titles. One of our biggest accomplishments in 2016 is earning our NW3 Title on our first try. It took some of my nosework friends 2 or 3 tries to earn their NW3. I am extremely proud of the team that we have become. Scout also hold 12 UKC Nosework Titles and we continue to work toward our Elite Title.
Reactive dogs are a challenge. For every one step forward, you could have twenty steps backward. It can very frustrating. I still have to be careful and aware 4 of my surroundings when I am out with Scout. I have to know what is going on all around me at all times when I am out with him.
Will Scout ever NOT be a reactive dog? Probably not. Does that mean he is hopeless? Definitely not!
I have to know what he can tolerate and what he can't tolerate. I think that is the biggest key to understanding our reactive dogs. We have to get out of that mindset that our reactive dogs are handicapped. They aren't. They are just wired different and we have the awesome challenge of getting to know them on their level and helping them navigate this scary world and find their niche. Having a reactive dog is not a curse, nor is it the end of the world. Just ask Scout!! 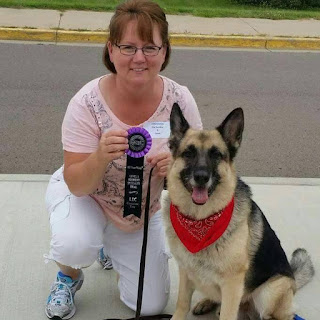