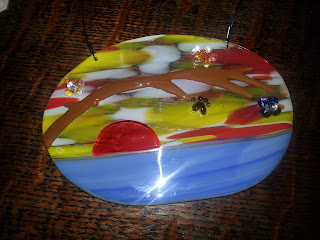 In my book "Furry Philosophy and Memoirs Set in Stone" I was fortunate enough to have others share stories of special memories of their pets and photos of the art made to honor them with love.

I am now collecting new stories for a revised addition and for my blog. I do this so that others may help heal their hearts by reading and resonating with these special words. I hope these special lives will live on forever through these stories. I believe when we lose a special love, it is comforting knowing others have loved as much and felt the same.

I was for fortunate enough to have Mary share her beautiful stories of many furry friends. She also allowed me to honor them by making a sun catcher with her special memories in mind, with their fur lovingly fused inside. . Thank you Mary, for sharing these  stories, and for trusting me, to honor your special  lives with love.
Mary starts her story with her first dog... 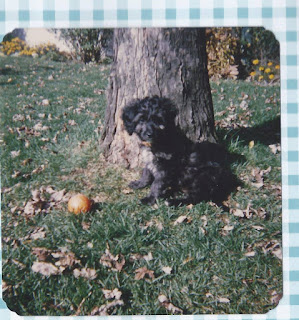 With the the exception of Romper, my first dog, they all grew up surrounded by pine woods and some hardwoods.  Mahoganie and Katy started out in my tiny house with 2 acres of land and a pond.  But we would go to the cabin in the  woods and when I married we moved to 2.5 acres of old pine tree plantation surrounded by Reenders blueberries.
Romper:  I was 16 and a club at the High School had a fund raiser by raffling off a puppy....something I would cringe at these days.  They brought her from class to class and put her in the middle of the floor.  She laid there with her head on the floor, big nearly black eyes looking at everyone and her tail wagging like mad.  She was all black except  a bit of white on her chest and the tip of her tail.  I fell in love and asked my mom if I could keep the puppy if I won.  Well my friend won her and a couple days later called me to say she couldn't keep her so she became mine.   Adored by the family , even my older brother played with her.  She went along with my parents when they delivered meals on wheels and walked to the beach with me everyday.  She didn't swim that I remember except when I carried her in and then she'd roll in the sand-what a mess. My first dog...my Angel dog.

Next was Mahoganie Rose.  I just bought my tiny house and saw an ad for Aussie puppies.  I was expecting blue because that's all I had seen but these were all red.  To this day, I've never seen a dog move like this one....close but not the same.  You know how they talk about  Michael Jordan's hang time?  Well that's how I remember her.  It was truly magical to watch her leap over, around, under, through barriers of any kind.  And oh what energy!  Frisbee was her favorite but I remember one day when she was still very young.  I came home from grocery shopping and put a container of cherry tomatoes on the counter.  She was behind me but I sensed she was suddenly very excited about something.  I looked at her and saw she was staring at the tomatoes "Look at all those balls!!"  SO I gave her one and she proceeded to toss it all over the living room until the skin split and then ate it.
This girl would also float in the pond...yes float.  She make a couple strokes and then just float....after chasing the taunting killdeer
I tried for a couple playmates for her.The first one the came along would have been perfect but I was not ready at the time.  The next one I brought home from the HS and he was a brat so he went back.  Then an abandoned litter showed up.  I took one of those in and he was wonderful but died of cardiac arrest on the vet's table when he was to be neutered.  Tore me apart!!!   Then I had a long weekend, went to the humane society and spotted, on my way out, a newly arrived litter.  I picked one out - Katy.  She worked out perfect!


Feather was next.  My odd colored miniature Aussies (I don't care what the Aussie people say - her pedigree says she is an Aussie) 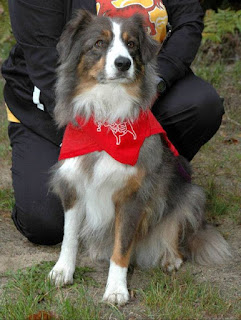 She earned quite a few badges and titles, loved to camp and hike and as I mentioned before play fetch with pretty much anything.  She also loved to be chased.  I saw that the day I went to get her when she got the whole litter running after her.  One session of obedience, there was only one other dog, a Beardie.  They spent play time running around in circles ...crazy herding dogs.   lol
When 8 yrs old, we nearly lost her due to Addison's.  Once we determined that's what it was, we had her another lovely 8 years when she suddenly succumbed to lymphoma.
2002 was a crazy year.  Katy was still with us, then in March I got Feather.  In August I got PJ and in Sept Cappy, my male.
Ken had agreed since we were going "rare breed" that we would try showing and breeding.   Well Feather had the temperament but the co-owner refused to let me breed her because of her odd coloring.   So I kept looking for a red and found PJ.  Oh my spunky gal caught me off guard from day 1.  She was called PJ for Plain Jane since she was a red try with minimal markings.  Fine by me because I don't like the big white collars etc.  She was flown into Chicago and when I went into the bldg to get her, I walked past a bunch of luggage and crates.  Just as I passed there was a puppy half bark/half yelp.  It was her and it was like she knew I was there for her!
She was spunky, athletic and incredibly quick at learning new things which she loved to do.  She was very very intuitive!!  At a training session  we were working on a new trick step by step.  I didn't even know the final goal and yet the second time I gave her a touch command she stepped into the hoop, touched the target, turned to face me and sat.  I was in shock when the instructor said that was what we were working for!  Blew my mind.  She loved playing on our homemade agility equipment and always had to find the highest spot.  I continued to call her PJ...not for Plain Jane but for Pacific Jewel since she came to me from Washington State.  Losing her really tore me to pieces.  I could barely eat for 2 days and lost 5 pounds in the week after.  Nearly 2 years and I still cry - sometimes very hard.
Posted by Jodi Jarvis-Therrian at 7:31 PM No comments: